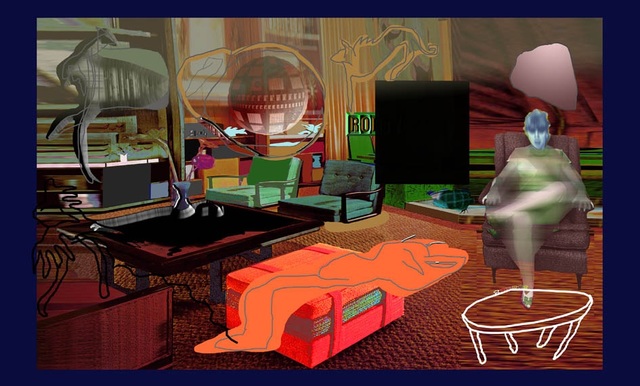 Anne-Mie Van Kerckhoven / AMVK
Other , 240 x 150 cm
Computerprint on 3M on plexi with magnetic back

"A computer-print for Richard Rorty on Plexiglass.  Rorty is one of my 18 "Philosophical Rooms". Charles Baudelaire shouts the 2nd half of the 19th century: "Le Satanisme a gagné!” and opens dead-tired the gates for Modernism as we know it. Simultaneously in North America Pragmatism is born, a materialistic philosophy of the New World of which Richard Rorty will become, in 1979, the most extreme beholder. The interior is occupied by Telstar, the first communication satellite, and me sitting in 1979 in a bedroom of the Chelsea hotel in New York.

Each "Philosophical Room" is a computer-interpretation of an existing interior of which I redefine the visual aspect, according to the mental impact of the philosopher. The name as a word becomes a presence in the room. My first philosophical room dates from 1998: Descartes. Than came Spinoza and Leibniz. Each space is given its outlook under the influence of the philosopher’s theory. It is me, the avatar,  greeting the specific theory, in an interior suited for the circumstance. I take the freedom to relate each philosopher very precisely with my personal evolution as a thinker."