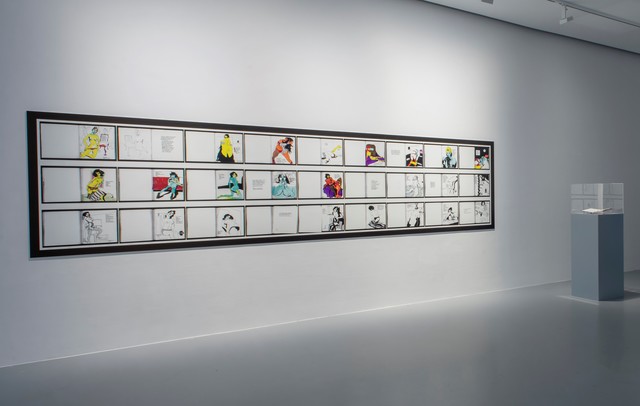 Anne-Mie Van Kerckhoven has created a vast body of critical work in which she focusses on the popular or media image, typically of women. One long-term project has been her series of Women portrait drawings, that have occupied many sketchbooks. The drawings, based on imagery with young women from such sources as pin-up magazines, are often juxtaposed with the quotes of philosophers. This particular set of drawings, named A Dash of Dolls after the soft-porn magazine that was in this case the source material, includes a quote and lists of keywords from Anatomie d’une destructivité humaine (Anatomy of Human Destructiveness) by Erich Fromm. An array of words, completed with the model’s own name, is put alongside each figure, as if she is speaking them. Fromm’s words, which describe human aggression as a part of the human condition for expressing unhappiness, provide these images with a radical desire to attack back from a position of subordination.