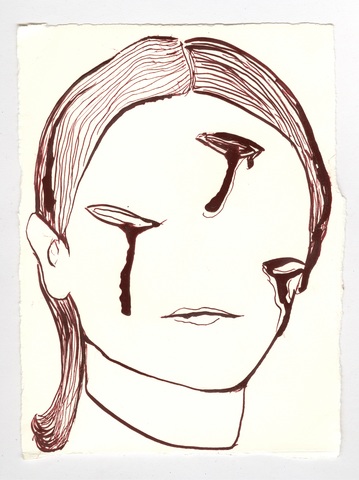 It seems clear that in the case of Dymphna, the sting – t.i., the violence – is in the tail of her story, in the beheadings and the flickering sword. But actually, as we understand today, it is in the beginning, when the king wants to force his daughter to marry him.

Sometimes, violence is defined as 'a force of more than minor significance that is deliberately exercised by one or more persons on others, whether or not with weapons or other resources'. It concerns every act by which a human being, against the will of the victim, is physically or mentally tortured, wounded or killed, or through which personal integrity is violated in one way or another. Sexual acts against the will of the person, such as rape, undesirable physical abuse or intimidation, are increasingly, and more and more clearly, considered to be violence by the public.

De Halle, is the location of this theme of 'Violence'. In her title image, Els Dietvorst immediately focuses on the main theme, from the perspective of a person who is being subjected to violence. Reality covers us with stigmata: our perception of reality – and our communication with it – hurts us. The immediacy of that experience can be seen in the works by Susana Pilar Delahante Matienzo, Els Dietvorst, Marlene Dumas, Wafae Ahalouch el Keriasti, Michèle Matyn and Liza May Post. Yet none of them are victims: they all have presumptions and act. This is explicitly the case with Vika Begalskaya, who translates the experiences of sex workers – together with them – into a puppet show; Louise Bourgeois, reflecting Goliath's violence; Lili Dujourie, transforming herself from object into subject; Maryam Najd, questioning the pornographic gaze; Hugo Roelandt, transforming himself rather than undergoing violence – and Anne-Mie Van Kerckhoven, remodelling the disintegration into thinking.

The violence that social systems or individuals inflict on others is thematised too. The Indian artist NS Harsha literally makes contemporary urbanity clash with the countryside. Georgian artist Koka Ramishvili documents the civil war from his bedroom window. Danny Devos tries to get through to the motives of serial killers. And with Guillaume Bijl, François Curlet, Nikita Kadan, Bruce Nauman, Artūras Raila, Olga Tobreluts, Wout Vercammen and Barbara Visser, the violence affects the artists and us. It is, rather, the interaction with violence that can open up new pathways.

Violence is intimately connected with power that is not used ethically. In medieval law, violence is the shared property of victim and perpetrator: essentially both parties had to come to an agreement afterwards about what made up the crime. Since the enlightenment, the state has a monopoly on violence and pretends to punish the guilty. But in reality, violence remains a personal matter, initially always undergone by someone, part of a flow of human action, which can and must be countered. Which is exactly what Ivan Kožarić does when he frees the energy of art from the power of its framework, simply by sawing.

Victoria Begalskaya
I was raised to be covered III, 2014

Louise Bourgeois
War from My Window, 1991

Guillaume Bijl
Geprojecteerde gevoelens tegenover iets of iemand [Projected Feelings Toward Something or Somebody], 1974