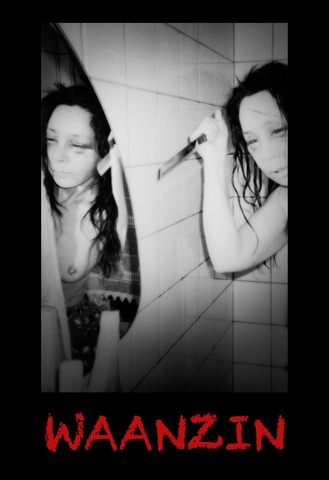 It's a crazy story, that of Dymphna, and a story full of madness. The devil lurks around every corner. But what is the core of the madness here? The desperation of the father when his wife dies, the delusion of marrying his daughter, or the fury leading to her decapitation?

Hallucinations and delusions can occur, making thinking and emotions confused. Disorders affect identity and physical functioning. Insanity or madness or lunacy: reality loses its normal sense because reason is disturbed, the mind bewildered. Where the Middle Ages distinguished categories such as phrenesis, insania, epilepsy and hysteria, the enlightenment started seeing madness as the opposite of reason, and subsequently, madmen were declared mentally ill. A pathological system was developed, but without clarity about the causes, which can be biochemical as well as genetic, and in which both psychological and social factors play a role. With sixties anti-psychiatry, these systematics and their treatments are rejected, and seen as social constructions and power manipulations.

The Gasthuismuseum (or Hospital Museum) is a good location for the theme of madness, not so much because once, alongside the sick, pilgrims were also cared for, but above all because, as tradition has it, it was built on the spot where, in a fury, Dymphna was beheaded by her father.

Liliane Vertessen takes up the knife herself in her title image, It's the experience of madness. One's own border experience is also the starting point for artists like Jan Cox, who exorcises his childhood memories; Douglas Gordon, who transfers a truth drug to what is only apparently just a self-portrait but is actually a portrait of the artist; and Cindy Sherman, who again and again transforms her self-appearance. Frank Theys and Yang Zhenzhong evoke the nightly delusions of life and death. Madness also has a social dimension: that of drug use and its criminalisation (portrayed by Sergey Bratkov); media forgery (thematised by Barbara Kruger); social adjustment (undone by Donna Kukama); and the relationship between ethnic platitudes and the personal (a subject by Taus Makhacheva).

For art, shifting the image people have of themselves, and aiming to change the one they try to make of the world, is not a problem, but a possibility. Art embraces the space in which the false certainty of ideologies crumbles and the unstable 'comes into the picture'. This is what Hüseyin Bahri Alptekin, Jan De Lauré, Nadia Naveau, Joëlle Tuerlinckx and Jan Van Oost show us. And it allows us to question one's own position, as Sigefride Bruna Hautman, Rebecca Horn and ORLAN do, with lust for freedom and grandeur; Minnette Vári, who relates to the flood of images; and Ina Wudtke, who embraces the whole absurdity of her position and gets to work. It is imagination that opens up and makes reality once more into a possibility.

Donna Kukama
A Portrait of the Artist as a Worker, 2006

Sergey Bratkov
On the Pillow, 2000

Barbara Kruger
Since I know, you cannot sit on a cloud, 1987