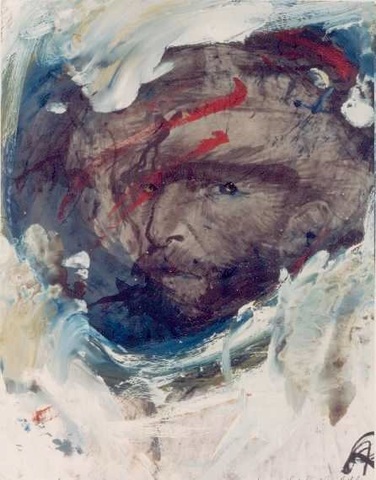 The Viennese artist Arnulf Rainier is known as a painter, graphic designer and photographer. In addition, he is also an enthusiastic collector of Art Brut.

Rainier hardly has any formal academic training and is largely self-thought. At the beginning of his career (roughly 1948 to 1951) his work is dominated by underwater scenes and mythical shapes. Due to his deep-rooted mistrust in rationalism and reality, he investigates the world of madness, the subconscious and the possibilities of dreams in an obsessive way. At the beginning of the fifties his work depicts less and less influence of surrealism. From then on, his work is created based on existing images: reproductions, pictures, his own drawings, ... This is when his powerful Uebermahlung portraits emerge. Examples of his later Uebermahlung portraits Van Gogh als Adler, Van Gogh als… and Van Gogh stelt sich Fechkrorbmaske Cezanne vor. One should not interpret the fact that Van Gogh’s portrait is covered or layered als denial or as a negation of the work. It has to do with a metamorphosis: each prior image will be “transformed” thanks to the creative work of the artist. Each image is a reflection of its own identity. The layering of the Uebermahlung is to be seen as something positive: the artist is trying to balance the two images: a balance between the “me” and the “other”.